Welcome to the next issue of SeniorInspire the Newsletter!

This week I want to start off with a question for you...

Do you know what the hashtag #WYGW means? We use it in the SeniorInspire Facebook group, but there seems to be some confusion about it.

If you don't know what it means, hit reply to this email and say 'I don't know' so I can tell you.

Do you have what it takes to be a PILF?

Can you feel it?

SeniorInspire's annual 100 Photographers I'd Like to Follow in 2022 contest and magazine (PILF for short) is right around the corner!

I know there are a lot of photography contests out there this time of year and that's why I try to hold off on ours until after Christmas. Hopefully things will be a little quieter for you during those three weeks after Christmas and hopefully you've saved some images for SeniorInspire!

I also want the contest to have an exclusive feel to it and that's why I only publish the magazine twice a year.

First, I want getting in the magazine to be special. You don't get in the magazine just for submitting an in focus image. The competition is fierce! Believe me, for every amazing image in the magazine, there's another two that aren't. But if you do get in, I want you to feel like your work has been put up against the best of the best, because it has.

The second reason is more personal. I still run a full time studio and it can get crazy photographing 75 seniors a year, putting out an almost weekly newsletter, a magazine twice a year and still have my family and dogs recognize me each morning.

A few of you have suggested I should issue it quarterly, but for now that's a no-go. It's way too nuts around here!

Now for some details on this year's contest...

We’re going to start accepting submissions right after Christmas, on December 27th. The deadline to get your entries in will be January 16th, with the winners announced some time in February and featured in the Spring issue of SeniorInspire the Magazine.

Like last year, there will be 20 RockStar winners and then 80 more photographers will round out the Top 100 for the year.

Rockstar winners will be the 20 photographers with the best overall portfolios submitted. To be considered for the RockStar award you'll need to submit at least 5 images.

Each winner will have one of their images featured in the magazine, but the Rockstars will each get a two page spread featuring several of their images.

Watch for more details in the coming weeks!

Thanks to all of you for being part of the SeniorInspire family. Your work is constantly getting better and I can't wait to see what you've all been up to this year!

Every year Pantone announces their color for the upcoming year, and for 2022 they created a new shade of periwinkle called, Very Peri.

Somewhere out there Violet Beauregarde is chomping her gum and feeling very happy.

Now don't ask me how Very Peri is different from regular old periwinkle, or even plain old purple for that matter... it just is dammit!

So if you're feeling all trendy and want to jump on the bandwagon, the hex code for Very Peri is #6666ac.

Read this if you use Photoshop to create composites...

If you've ever used Photoshop to put together a composite, only to feel like something just wasn't right when you were done with it... it was probably the color.

Color harmonization between your different layers can be a real buzz kill and worse, fixing it to look realistic can be a total pain!

With the latest version of Photoshop 2022 they've introduced one click color harmonization in their neural filter menu that is so amazing, it will split your wig.

Check out this short video that walks you through how easy it now is to harmonize your layers. With one click you can quickly match the luminosity, color, and overall tone of your layers. 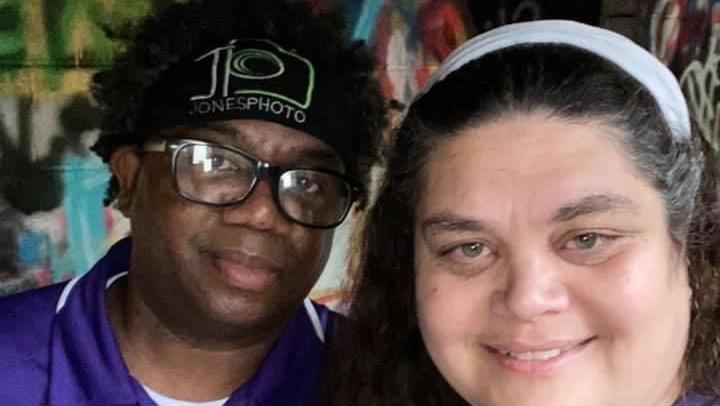 Lend a helping hand to the Jones'

I believe I first met the Jones' virtually on the ol' Pro4um and then in real life at Ohio's PPA convention. After that, I don't think I've been to a photography related event where they weren't in attendance. They're everywhere!

If you don't know them, seek them out. They're the kind of good people you want to meet in the photography business.

And they love purple! I think lime green too, but definitely A LOT of purple!!

Recently, Shawn and Willard went and got in the way of the tornadoes that ripped through Kentucky and their studio took a lot of damage. A friend of theirs started a Go Fund Me Campaign for them and if you have a few dollars to spare, I think it would be really nice of you to help them raise some money to get their studio back up to snuff.

To contribute, follow this link. You'll be helping out a fantastic couple!

PS One time at SYNC Camp... Willard convinced me I needed to spend $90 on a tripod I ended up NEVER using. And despite that, I still think he's a helluva guy!

As we head into the holiday season, I urge all of you to avoid stealing packages off your neighbor's porches.🦝

LOL, I know you're not that kind of person

But just in case you were contemplating a life of crime, be warned there are people out there leaving glitter/fart bombs disguised as Apple products on their front porches, hoping unsuspecting thieves will pick them up.

If you were into the Home Alone movies and you like seeing thieves get their comeuppance (and who isn't?), be sure to check this out!